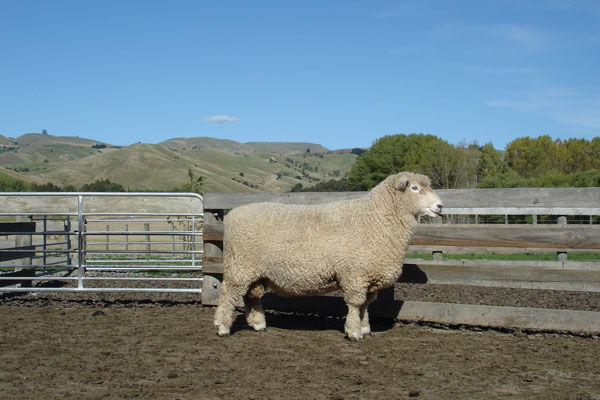 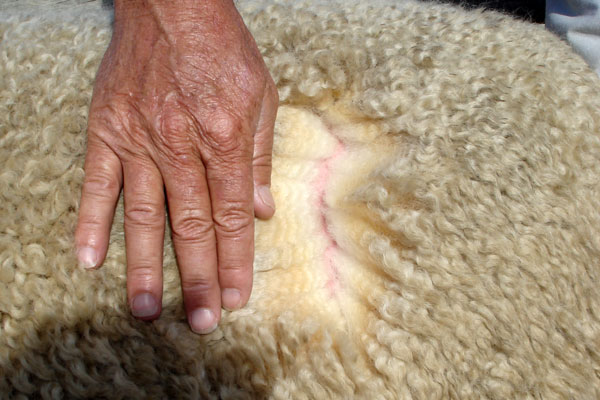 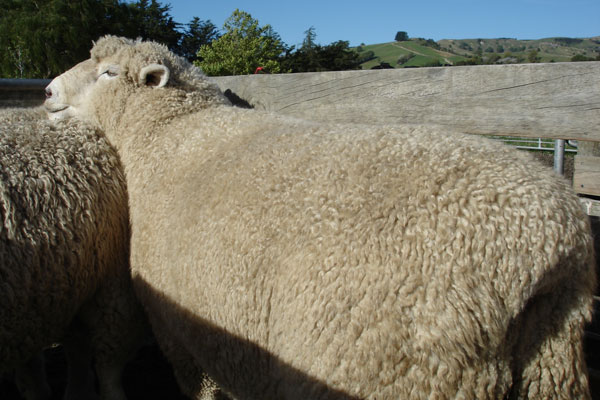 Sire demonstrating some of the physical attributes that we strive to breed.

We have always strived to breed the complete package with sheep needing to be top performers (genotype) and have excellent physical characteristics (phenotype). Our Romneys should have:-

SOME FEATURES OF OUR BREEDING PROGRAMME 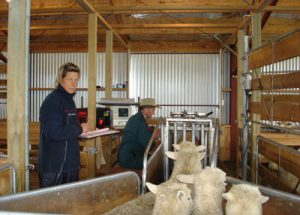 All sale rams have been eye muscle (loin) scanned since 1997 which has ensured that only those rams with superior eye muscle area are considered as potential stud sires.

Given the high heritability (approx 60%) of this trait very worthwhile progress can be made when sheep are selected for superior carcase qualities (ie more meat in the loin and hindquarter).

Chris Spark (WRS Scanning) has scanned our rams for the last decade or so and in recent years has commented that our Romney 2th rams now have a similar eye muscle area to the meat breed rams that he scans at a comparable age.

He has also noted that as our Romneys have improved over the years the range of results has narrowed and the poorer scanning sheep have almost disappeared.

Over the last 15-20 years we have placed a lot of emphasis on worm resilience in our breeding programme mainly by withholding drench from lambs and hoggets for extended periods and then retaining only those that have good growth and few dags. Our lambs now receive only one drench in their first
5-6 months (triplets reared as triplets get 2).

We believe that the price we pay in terms of compromised lamb and hogget growth, in order to expose the less resilient sheep, is well worth it given the cumulative gains we have made over the years despite the relatively low heritability of this trait (around 15%). Increasing the worm resilience status of a flock not only means less drench but also enhanced lamb and hogget growth, given that the growth of the more resilient sheep will be less affected by worms over the latter stages of the drenching interval.

Daggy sheep would have to be the ultimate turn-off for sheep farmers. Alongside worm resilience we have also gone all out to breed sheep that are less prone to dagginess by culling and by recording each ewe’s propensity for dagginess over her lifetime.

Dag scores are recorded for both ewes and lambs prior to annual shearing in mid February (prior to lambs receiving their second drench) and the lambs are scored again as hoggets and as rsg 2ths. This information allows us to calculate breeding values for this trait and is taken into account when calculating the 2th ram indexes. We include 3 dag scores for each ram plus the most recent score for his dam with our sale information.

While we readily concede that dagginess can be influenced by feed conditions the heritability of this trait has nonetheless been estimated to be around 25%. This is high enough for good progress to be made and our experience here would definitely support that. We have now got to the point where we normally only have to dag about 20% of our ewes prior to annual shearing in February. They are not dagged at any other time apart from when they are pre-lamb crutched in July.

Over the years we have been somewhat obsessive about the feet on our sheep – particularly with regard to leg angle, pasterns, feet shape and colour (black) and of course scald and footrot susceptibility. Every ewe in the flock is assessed annually prior to weaning and given a foot score. Any faults are noted at this stage and if serious enough will result in that sheep being culled regardless of her other qualities.

In addition all potential sires are DNA profiled for footrot susceptibility prior to selection. Using the same blood sample we also obtain a DNA based rating for cold tolerance which influences newborn lamb survival. 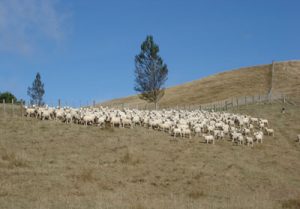 Ewe hoggets doing the hard yards prior to tupping. 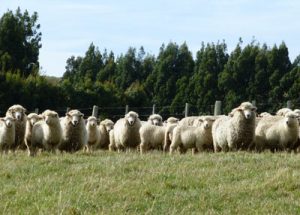 Ewe hoggets (12 months wool) with lambs at foot prior to weaning/shearing in January.

For the last 20 years or so we have mated all of our ewe hoggets (including hogget progeny) irrespective of the season. Throughout that time they have been mated to selected Romney sires with the top end progeny retained as flock replacements or as potential sale 2th rams.

Usually approx. 15% of sale rams are out of hoggets and we are always impressed when hogget progeny rise to the top despite their handicap of being born later and weaned at lighter weights. Over the years a number of our stud sires have been hogget progeny and last year the top index sale ram was out of a hogget.

This has always been one of the many attributes that we have focussed on in our breeding programme and accordingly we have always developed a respect and fondness for ewes that keep doing the business year in and year out and pass every test along the way. Normally very little allowance is made for age here with all ewes run together and lambed together from the time they are 2ths. They are split up at lambing according to their scanning status only.

In most instances these old ewes are not recognised throughout the season apart from when they are individually mothered up with their lambs prior to weaning and then later at mating. So they are not given any special dispensation and have to hack the pace along with the rest of the flock.

The main criteria for ongoing inclusion in the flock is weight and quality of lambs weaned, structural soundness and condition. ie if the old ewes tick those boxes then they go around again. Our flock would include a significant number of ewes aged 7 or older (approx 15%). Clearly not every ewe makes it that far but the proportion has slowly increased over the years.

As sheep breeders we are always pleased when a ewe performs impressively but it is that much better when ewes do that again and again. So we regard these old girls as real stars and value their genetics enormously! 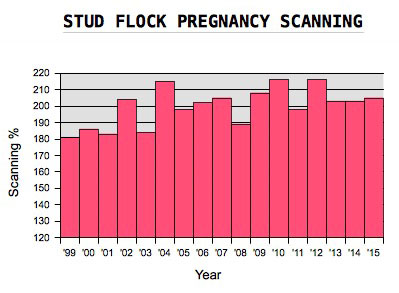 The conception rate in our flock has become increasingly consistent over the years irrespective of feed availability. The stud flock (incl. 2ths) now scans at around 200% most seasons with few singles and less than 1% drys.

While we don’t seek triplets the reality is that 10-15% of ewes will conceive triplets in a flock that scans around 200%. As stud breeders we believe that our flock needs to be scanning at around that level in order to have a real impact on our clients’ flocks when they are wanting a lift in fertility. This would probably be a requirement of more than 80% of our clients when they first contact us.

Consequently we have strived to breed ewes that are capable of rearing 3 lambs successfully when required with negligible human intervention and no supplemenation of their diets.

Our triplet ewes are run with the main mob up until about 2-3 weeks prior to lambing at which point they are given more room and slightly better feed. They are set stocked for lambing at approx. 5/ha and are pretty much left alone although they are regularly observed, albeit from a distance, and we occasionally provide assistance if necessary.

Twenty years ago we used to really struggle to wean good lambs that had been reared as triplets. However by monitoring and recording the performance of triplet ewes and their progeny over time we have identified bloodlines that have an enhanced triplet rearing capability. Superior milking and outstanding mothering appear to be two of the key qualities and we have endeavoured to infuse those attributes into the flock as we have gone on. Progress has been significant and our triplet mob now often docks around 230% with lambs reared as triplets weighing 30- 45kg at weaning.

There is still scope for improvement however and our triplet performance continues to be a ‘work in progress’ as are all the other components in our breeding programme.

Our numbers are continuing to increase each season and therefore we can usually accommodate new clients at any price level.

We endeavour to provide clients with a minimum of 4 rams to pick from for every ram that they are looking to buy – i.e. we would normally give a client twenty rams to pick five from and they would all be of a similar quality.

We always try to allow sufficient time for clients to be able to relax around the smoko table and we never rush the ram picking process!